A 2016 study indicated that 87% of Americans disliked shopping at a car dealership. We all know the stereotypes involved — slick-talking salespeople and worries about getting ripped off.

Carvana (CVNA -3.74%), an online platform for buying and selling used cars, is trying to improve the customer experience — transforming a process that can take hours at a dealership into a click-to-buy e-commerce transaction.

However, the company could have some fundamental flaws that investors should be aware of before riding with Carvana over the long term.

Carvana is a hit from a growth standpoint. The company’s annual sales have grown to more than $14 billion over the past decade. Vehicles are a big-ticket item; the average used car in America costs $33K. Understandably, Carvana has used debt to accumulate inventory, which has increased as the company grows and sells more vehicles.

However, the company can’t do this forever without turning a profit. Many up-and-coming businesses lose money until they grow large enough to begin outrunning their spending. But Carvana has lost almost $2 billion from its operations over the past year, despite being in business since 2012 and ramping its annual revenue up to $14 billion.

On Carvana’s second-quarter earnings call, management said it expects to generate significant positive earnings before interest, taxes, depreciation, and amortization (EBITDA) in 2023. Investors should appreciate management’s focus on the company’s bottom-line results, but keep in mind that EBITDA isn’t the same as cash profits.

Cash flow is the blood of a business — it circulates through a company and keeps it alive. Carvana is still falling woefully short in that regard, which only stands out more as interest rates rise and make it more expensive for cash-burning companies to access debt.

Management has outlined its long-term financial goals for the company, including bringing Carvana’s gross profit margin to between 15% and 19%, and selling, general, and administrative expenses (SG&A) to 6% to 8% as a percentage of total revenue. It hopes to eventually hit an EBITDA margin between 8% and 13.5%.

However, in the company’s second quarter of 2022, the gross profit margin was just 10.2%. SG&A was 18.6% of total revenue, and the EBITDA margin was negative 6.2%. So its goals seem pretty ambitious; to reach them, SG&A, for example, would need to remain the same while revenue triples.

That’s not to say Carvana can’t do it, but investors shouldn’t just take its forecast at its word. The company must demonstrate an ability to grow without spending more money.

And these long-term goals will probably take a while to achieve, bringing investors back to the company’s cash burn. When will Carvana need to raise new funds? That’s probably coming down the road.

Remember that the past 18 months have featured a red-hot used car market with prices shooting up from multi-year norms. It’s easier for Carvana to make money when it can acquire a vehicle that is likely to rise in value between the time it’s bought and and the time it’s resold.

How will the company fare if a recession cools used-vehicle prices? Again, these are the what-ifs that should make investors cautious when there aren’t any cash profits. 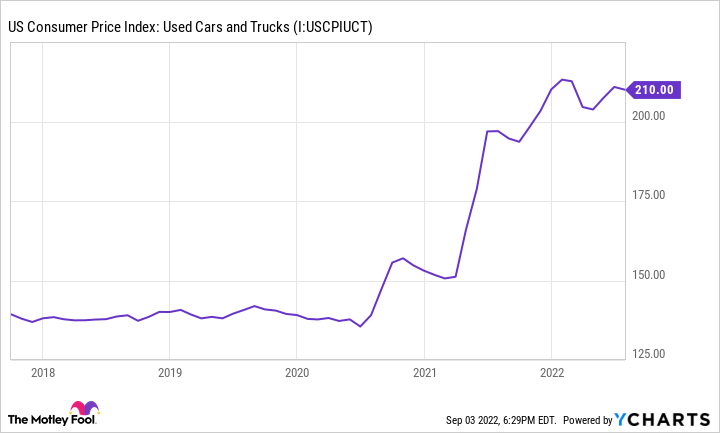 Lastly, the Fed is raising the federal funds rate to combat soaring inflation. Companies that borrow a lot of money are sensitive to interest-rate changes; higher interest rates would be another headwind for Carvana, which would then have to pay additional interest on the debt it funds inventory with.

It could become a more efficient business as it continues growing larger. Still, the low-interest-rate environment and a hot used-vehicle market benefited Carvana. Investors will now see what happens when everything isn’t going the company’s way.

Sam & Max Save the World and Beyond Time and Space Remastered review – Great thundering jellyfish on the squishy road to mayhem, these...

How To Buy Stocks in 4 Easy Steps

To date, I have not written about President Biden's student loan forgiveness initiative. Why? Because the rule...
Passive Income

To date, I have not written about President...

To date, I have not written about President...