Women ‘proving to be better investors’ as they hold their nerve and avoid ‘impatience tax’ which could cost them £193,000 over 30 years

By Angharad Carrick For This Is Money

People are becoming more impatient when it comes to their investment habits, according to a new report by Alliance Trust.

With inflation at a 40 year high, interest rates continuing to rise and markets in disarray, it is understandable to want to sell some investments and wait for better market conditions.

But investors considering selling out risk crystallising losses and paying an  ‘impatience tax’ worth nearly £200,000.

Women have held their nerve in the face of market volatility far better than men have, according to Alliance Trust’s research

Women have been more resilient in the face of market volatility but are less likely than men to invest overall, according to the research by the investment trust, Alliance Trust.

But this approach to investing has been vindicated during this period of market volatility.

Alliance Trust’s research reveals women are less likely to crystallise a loss when the market dips because they are more likely to hold their nerve.

Almost half of men (48 per cent)  have sold investments at a loss when they’ve plummeted in value to try and stem their losses, while just 38 per cent of women have done the same.

Despite being less likely to invest, women are proving to be better investors

Mark Atkinson, head of marketing and investor relations at Alliance Trust, said: ‘Despite being less likely to invest, women are proving to be better investors. Their behaviour implies a steady long-term investment strategy, without knee-jerk reactions or impatient decisions.

‘This is likely to result in much better financial performance, protecting them from the “impatience tax”.

‘The last few weeks has seen even more chaos in the markets, and the dramatic headlines may well prompt a crisis of confidence for investors.

‘Holding your nerve is key; the best investment is one which is left alone for as long as possible. Patience will pay off; trust the market to outperform cash in the long run, as it always has.’ 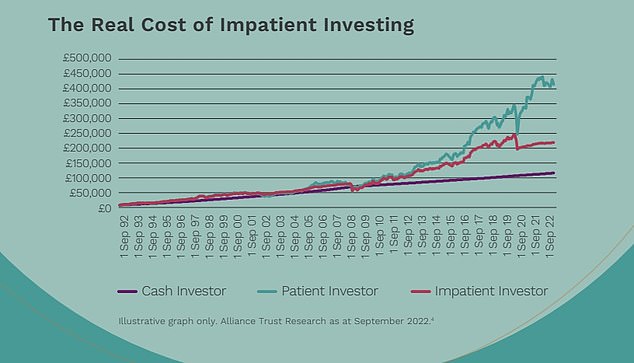 Hold on: Investors could lose out massively if they’re impatient, as shown by the graph above

This insight into how men and women differ in their investment approaches forms part of Alliance Trust’s “impatience tax” campaign.

It categorises ‘impatient’ investors as those who sell a losing share when the market dips, only to buy it back at a higher rate once it recovers.

It compares two hypothetical investors who both invested £10,000 with Alliance Trust and added 10 per cent of the average national salary a month for the next 30 years.

If this was extrapolated across UK investors – assuming an impatient investor sold a quarter of their investments on a 5 per cent fall – it could cost UK investors £1.3billion in just 12 months.

Some links in this article may be affiliate links. If you click on them we may earn a small commission. That helps us fund This Is Money, and keep it free to use. We do not write articles to promote products. We do not allow any commercial relationship to affect our editorial independence.

Should You Consider Investing in Enhabit (EHAB)?

STIR up homemade treats to see your family through winter. DIY chutney, jam and marmalade will bring a...
Make Money Online

When Ella* left an abusive relationship, her partner cleared all their joint bank accounts, leaving her with...
Passive Income

<!-- SHOW ARTICLE --> UVU Students participate in the Engineering Technology Fair in the Computer Science building on...

STIR up homemade treats to see your family...

When Ella* left an abusive relationship, her partner...

A reader asks, “I cannot decide between Nippon...

STIR up homemade treats to see your family...

When Ella* left an abusive relationship, her partner...

A reader asks, “I cannot decide between Nippon...