In the past few years, we’ve seen a wave of new nature enthusiasts take to the outdoors like never before. Overlanding, backcountry camping, trail riding, it’s all surging in popularity. Reconnecting with the natural world, and the isolation that comes with taking the road less travelled certainly has a charm to it.

Car companies have responded with more off-road-ready vehicles, off-road packages, and accessories that can help you get as far out into the wilderness as you’re willing to go. GMC’s AT4 trim package, first seen on the Sierra pickup truck, added brawny off-road bits and more capability, and it’s since been filtered down to the smaller models including the Canyon, Acadia, and now the Terrain.

The GMC Terrain compact crossover is perfectly suitable as family transport but it’s not the first choice for a tough off-road vehicle. My tester, however, was fitted with the new AT4 package that’s meant to infuse a bit of ruggedness into a vehicle that’s anything but rugged. But after a week with the Terrain AT4, I failed to see the point. It just felt like any other Terrain with a few extras.

For what it is, and for its intended buyer, the Terrain does everything it should. It has standard AWD, decent ground clearance, and a roomy cargo area. It’s also comfortable and big enough to seat 5 adults, and the big grille with bold G-M-C lettering has been synonymous with big tough trucks for decades. So it looks like it’s ready to take on the trails. Except that it’s not. And that’s fine because most buyers looking at vehicles like this have zero intention of doing so. I also noticed that the Terrain doesn’t get the AT4’s signature red recovery hooks jutting out the front bumper. That makes it harder to distinguish this as anything other than a “normal” Terrain outside of its AT4 badging.

So what does the package add? For one, you get a steel skid plate in the front and a darker looking grille. Inside you get “AT4” embroidered head rests and an off-road drive mode, which programs the standard all-wheel drive system to better handle loose surfaces. Last but not least, black 17-inch wheels with chunkier tires give it a tougher look. 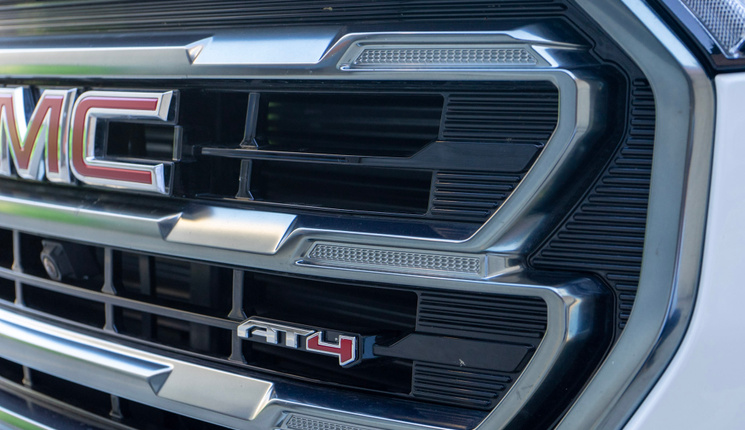 All new Terrains benefit from a facelift that adds redesigned LED lighting, a redesigned grille and front fascia, and a refreshed interior with a new push-button style gear selector. Also available on the SLT and AT4 trims is a new pop-up style head-up display.

Those wheels and tires are probably the most off-roady thing about the Terrain AT4, and they certainly have an advantage on the rough roads and potholes in the Toronto area, but extra ground clearance and locking differentials are what you want for off-road duty and you won’t find that here.

So what this AT4 package really amounts to is a few badges and some meatier tires. Which hardly makes for an off-roader. Again, I get it, that’s not what this is but others in this segment at least make it look like they have off-road intentions and the Terrain, well, doesn’t. 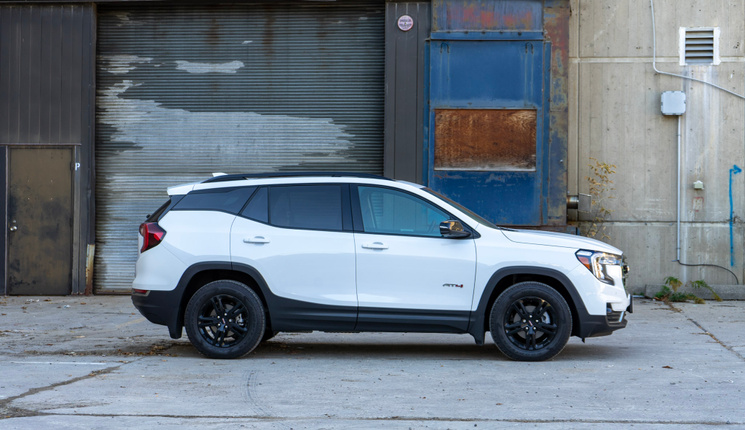 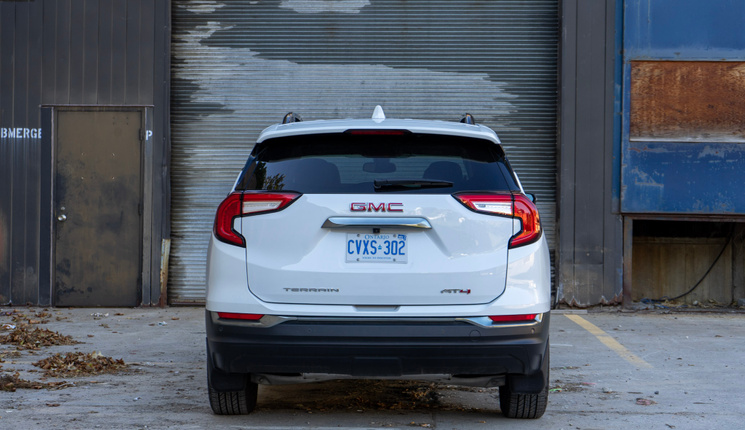 Take the Toyota RAV4 Off-road, which is a direct competitor. The “Off-road” trim is also more of an appearance package but its retuned suspension and more serious A/T tires are a step up and a more honest attempt at giving customers some substance to go with the style. And then you have competitors like the Cherokee Trailhawk and the Bronco Sport Badlands that take things even further and will really let drivers get out into the rough stuff while still being perfectly suited for the highways and driveways where they’ll invariably spend most of their life on.

The notion that you have more capability than you need, sells, and customers look for this. It’s the same reason supercars have such an allure. You’re never going to use all that performance but it’s there if you need it. Sadly, there’s no such notion with the AT4 badged Terrain. 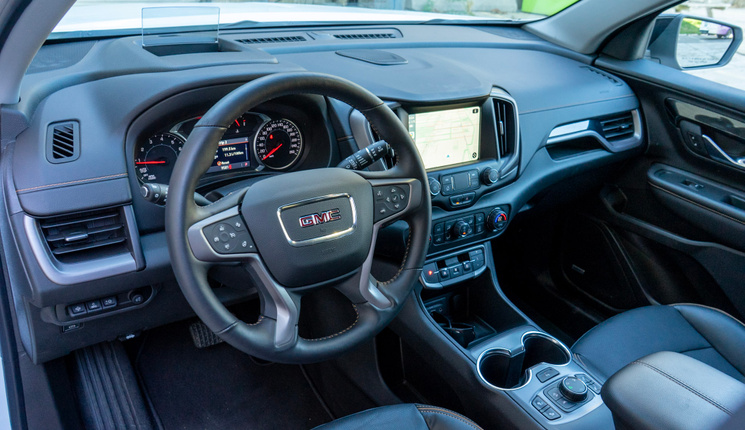 Things don’t get much better inside with more cheap-feeling plastic than the inside of a dollar store and a push-button gear selector that’s not as intuitive as it should be. I’m also tired of seeing the same indicator and wiper stalk design on every single product GM makes from Chevys to Cadillacs, mainly because they’re just not very ergonomic, and feel like they were made for people with longer fingers than mine.

We did enjoy the comfortable ride, the smoothness of the auto stop/start system, and even how the engine just fades away into the background when cruising. We also liked the clear and easy-to-read gauges, the simple but intuitive infotainment, and the wireless Apple Carplay and Android Auto. The Terrain is also spacious with ample legroom and headroom in the back for taller adults. 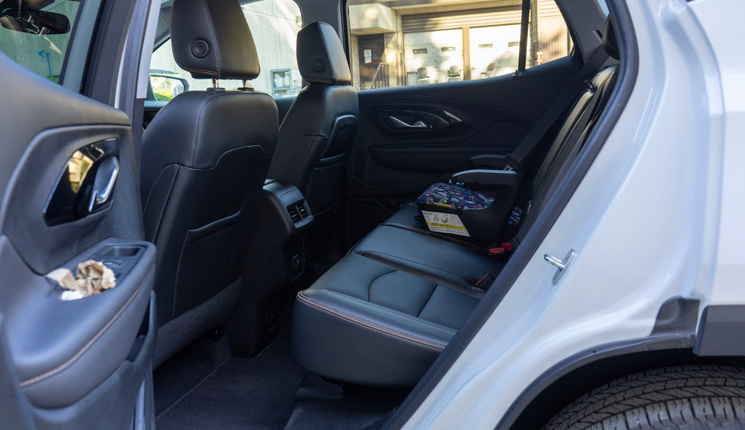 There isn’t a lot of power—the 1.5-litre turbo mill makes 170 horses—but it does have reasonable torque (203 lb-ft) for comfortable driving in and around the city. Passing power on the highway is ok, but again, competitors offer more here.

The starting price of $35,792 for an AWD Terrain SLE is also more expensive than the CR-V and the RAV 4 both of which offer more in the way of safety and driver aids. Even this higher-spec AT4 needs an additional package tacked on to it to get adaptive cruise control and blind spot monitoring which is offered at the base level on the Honda and the Toyota.

If you’re looking at the GMC Terrain, my advice is to pass on the AT4. It’s really not much different than a base Terrain, save for a bigger infotainment screen and a few more features. And if you want something with real off-road capability you’d be better off looking elsewhere.

With digital transformation on the go, many small and large businesses are looking to establish their e-commerce...
Make Money Online

A hard landing is one of the four main investment trends advisers should watch out for in...
Freelancing

Article content There is a new event being held for the Food Bank’s Christmas Hamper and Toy...

With digital transformation on the go, many small...

A hard landing is one of the four...

With digital transformation on the go, many small...

A hard landing is one of the four...